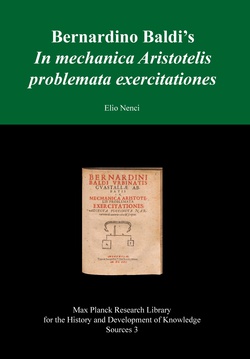 "In mechanica Aristotelis problemata exercitationes" written by Bernardino Baldi is reprinted with an introduction and commentary.

"In mechanica Aristotelis problemata exercitationes" written by Bernardino Baldi is reprinted with an introduction and commentary as the third volume of the series "Sources of the Max Planck Research Library for the History and Development of Knowledge." The volume is also freely available in electronic form as an open-access publication on the Internet at www.edition-open-access.de.
The "Exercitationes" were first published in 1621, four years after the death of the author. The work belongs to the long tradition of studies on the pseudo-Aristotelian "Mechanical Problems" developed during the Renaissance but, unlike most other works written during the sixteenth century, it takes a critical position against the theoretical approach of the pseudo-Aristotelian text. The "Exercitationes" display a systematic application of Archimedean principles to the explanation of the questions discussed in "Mechanical Problems" illustrating the patchwork character of preclassical mechanics. Moreover, Baldi's work presents lengthy digressions that considerably widen the boundaries of mechanics.

Part 1: On this Book

Translated from Italian into English by Adriano Carugo